What is tiramisu, and why does it have such a funny name?  A quick trip to Wikipedia gives us the following: “The phrase tirami su literally means ‘pick me up’ or ‘pull me up’ in reference to the effects of the sugar and espresso. It is also thought to mean ‘pick me up to heaven’ due to the delightful taste.”  Furthermore, “Tiramisù is made by soaking savoiardi biscuits in espresso with the optional addition of liquor and sugar and layering them with a mixture of mascarpone cheese and zabaglione, a light custard made with Marsala wine or a liqueur. Cocoa powder is sprinkled on top of the dessert, which is refrigerated before being served.”  According to the same article, the exact origin of the dessert is debatable, but it is definitely Italian.  And it is definitely a “pick-me-up”.

While at my local grocery store yesterday, I passed by a rack that had ladyfingers on display (I guess they were on special), which made me think of my mom’s tiramisu, which she sometimes made for large family gatherings.  Now, the recipe she follows is a far cry from the classic recipe, as it uses cream cheese, which is an even further cry from mascarpone than ricotta, which is used in some recipes as a substitute.  The cocoa powder is not just sprinkled on the dessert but also incorporated within the cream cheese and coffee liqueur mixture.  And speaking of the cream cheese/coffee liqueur mixture, the recipe she uses has whipped cream — which I forgot to add when I made the tiramisu last night, resulting in me slightly freaking out but in the end all turned out just fine as far as the cream cheese/coffee liqueur mixture (I used Kahlua).  Leaving out the whipped cream just resulted in a more pronounced cocoa/coffee taste in the cream, and a denser consistency than what I’d have had if I remembered to mix in the whipped cream.  The mixture of Kahlua, coffee (the recipe calls for espresso, but having no espresso, I used 2 tablespoons instant coffee) and water used as dipping liquid for the ladyfingers was just a tad strong, as the bottom layer of ladyfingers ended up with a strong, but still manageable and not too overwhelming punch of Kahlua flavor.  But the Kahlua was definitely making its presence known.  Overall, it wasn’t a bad first attempt and the only note I would make is that the flavors were bolder due to the combination of leaving out the whipped cream and the dipping liquid.

Breaking out my new set of springform pans, I chose the medium sized pan and arranged the ladyfingers accordingly after dipping each one (just a quick in and out, no need to dip for even more than a second!) in the Kahlua/coffee mixture, resulting in a ladyfinger fort…

One more layer of dipped ladyfingers plus another layer of the creamy stuff, finishing with a dusting of cocoa powder…

I let it chill in the fridge overnight and served to my friend S, who came over today (my ladyfinger fort held up on its own!)… 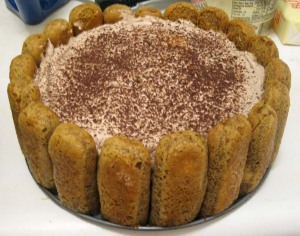 The denser consistency resulted in a clean, no mess, cut…

I actually liked the consistency of the tiramisu without the whipped cream.  The only thing that bothered me slightly was the strong presence of the Kahlua and even then it wasn’t so bad.  Next time, perhaps less Kahlua.  Actually, glutton for punishment that I am (I did hand-cut 42 Yankees logos by hand with a box cutter and a makeshift stencil for 3 hours), I may even try making a classic tiramisu, mascarpone and all.  I may even try making my own ladyfingers as opposed to buying them!  I found a technique for making the ladyfinger layers into one cohesive ladyfinger “cake” instead of indvidual ones.  Just so I can compare the classic to the more contemporary revision of the recipe.

When it came to assembling the dessert, I pretty much took my own liberties as opposed to following the directions to the letter.  You know what it’s supposed to look like, so no need to stick so steadfastly to the instructions.  But maybe next time I’ll actually brush the liqueur/coffee mixture over the ladyfingers as opposed to dipping each one to prevent saturation.