There comes a certain point in one’s life when one finds oneself surrounded by friends who are having babies, buying their first home, getting engaged, etc.  And when one’s life has not been blessed by any of the aforementioned events, what does one do?  Well, bake cupcakes, of course!

As a “Congratulations on your new baby girl!” gift, I made chocolate cupcakes for J & C this past weekend.  My friends and I visited them at C’s parents’ home to see their baby girl for the first time.  And I have to say, my cupcakes were sweet, but not sweeter than the little bundle curled up in her crib (who already smiles, turns and even burps on her own — she’s advanced too!).
Looking for a new chocolate recipe, I googled and found a dark chocolate cupcake recipe.  I was totally taken in by the photography on the post.  Excited and inspired, I bought Valrhona Dutch-processed cocoa powder (translation: expensive) and even used two blocks of Scharffen Berger artisanal bittersweet chocolate (translation: also expensive) that I’d been saving for a semi-flourless chocolate cake but decided to splurge on this recipe too.  You read enough baking blogs, you start picking up what the good names in chocolate and various other ingredients are.  Curious about the difference expensive (and supposedly better) ingredients make, I was excited to begin.
This post is actually taking two nights to write.  I wrote everything up to the previous paragraph last night, and now I’m having trouble resuming my train of thought when I abandoned the post in favor of sleep.  I ended up having to revise the first paragraph, actually.  Anyway I’m not sure why I’m telling you this.  I guess my point is, once you have a train of thought, you can’t stop it and assume you can pick it up later.
Where was I?  Oh yes…

It was a little difficult chopping up the Scharffen Berger, since it comes in such big blocks.  Each block is pretty dense and just full of dark chocolatey goodness.

Pictured above is my favorite thing to do in the world of baking — melting chocolate over a double boiler (or, as I do it, a metal bowl set over some simmering water).  I love how the mixture of, in this case, cocoa powder, bittersweet chocolate and butter comes together during gradual heating and stirring to form this very shiny, very silky chocolate goo that just dribbles back into the bowl in ribbons when you raise your wooden spoon (or whisk in this case).  I think of the Dove chocolate commercials everytime I see the melted chocolate.  As pictured above, Dutch-processed cocoa is actually reddish in color, and it’s what’s used in some red velvet cake recipes.  It’s got a milder flavor than natural unsweetened cocoa powder, which has more of a bitter taste.

The resulting batter was quite thick and resembled icing more than it resembled batter:

I thought it was funny, actually, that the recipe never told you to use a mixer.  Everything was to be whisked by hand.  I didn’t follow that part and used an electric mixer instead (spares you the sore arm and saves time too!). 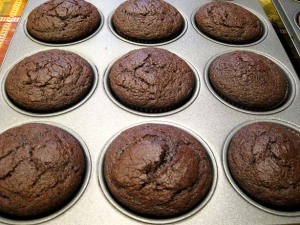 The cupcakes came out a bit dry, and I kept asking my mom, “But they weren’t too dry, right?  They’re not like, horrible?”  I am not one to take flaws in my baking lightly.  I tend to soften the truth about what might have gone wrong in order to console myself.  And then later I’ll fully admit what went wrong.  The fact that all your excitement and anticipation during the process of putting it all together, not to mention the thrill of trying out precious, expensive ingredients that are new to you, and your mindfulness in not wasting any of it, culminated in a disappointing moment when you realized your cupcakes were a bit dry is just too much to bear.  And so I turn to my mother for reassurance that my cupcakes were fine.  But she kept saying that word — dry — and it could no longer be denied.  Now, I don’t want you to think I made crouton cupcakes.  They had some moisture, just not as much as previous chocolate recipes I made.  For one, the recipe had a typo — you will notice, if you bothered to look, that it said to preheat the oven to 175 degrees.  Thinking they meant 375 degrees, I set the oven accordingly.  But it was only after the deed was done and all cupcakes were baked that I realized it should have been 350 — after all, 175 is half of 350 and so the blogger who posted this recipe must have been for some reason thinking…well, I don’t know what they were thinking.  But I believe that the unusually high temperature contributed to the dryness.  I would try this recipe again, only with a few modifications.  Perhaps taking this and adding some elements from past moist cupcake recipes that I’ve used.
Tonight, as I was aiming to finish this post, I just heard that my friends T and F are closing on their first home tomorrow.  T asked me if it was time to request cupcakes.  And how can I say no to an opportunity to try a new recipe?  Watch this space for the results…
About a Cheesecake – Vanilla Bean Irish Cream Cheesecake
They say when you cook, and you cook with love, it shows in your food.  I suppose it’s true — you take your time, you’re careful, you enjoy what you’re doing and the results end up being something almost if not out of this world.  Well, love was not the primary emotion in my heart at the time of this cheesecake’s creation.  I was not in the best of moods when I created it, and even went a bit absent-minded as I missed the modification to use 2/3 cup heavy cream, 1/3 cup Irish cream.  I ended up putting 1 cup heavy cream and then threw in 5 tablespoons Irish cream to make up for my oversight.  I also forgot to put parchment paper on the bottom of the springform pan before forming the graham cracker crust.  And, right before I was to put the pan in its water bath, I nearly forgot to cover it with foil to prevent water leaking into the pan, thus resulting in a soggy crust.  Thankfully, I remembered just in time.
45 minutes later, after popping it into the oven, the cheesecake had to cool in the oven for another hour after baking.  Shutting off the oven, I waited the required hour.  And then I took it out.  Took the foil off, inspected the crust, and…soggy outer crust.  My heart was broken.  The recipe seemed so promising — this was going to be a rock star cheesecake!  So, already in a foul mood, my mood just became darker and I just wanted to get the damn cheesecake over with.  But wait!  I had to move it to a cardboard round as it was supposed to be for an office potluck!  I don’t even want to get into that part — let’s just say I paid dearly for my mistake of forgetting to line the bottom with parchment/wax paper.  But you wouldn’t know from the look of the cheesecake that I had some difficulties.
So, judging from the picture below, can you look at that and think — “She didn’t feel any love when she made this.  She was in a bad mood the whole time!” ?  Would you be able to tell me that it wasn’t a big hit at the office potluck?  So much of a hit, in fact, that some people regretted not getting to it in time to have a slice.  In fact, some people had two slices.  And there were some, who scraped together what was left on the cardboard round just to form even a semblance of a slice.  Apparently it was the topic of conversation among some people, this cheesecake.
Maybe sometimes, even if you don’t think so and you don’t immediately feel it in what you’re currently doing — maybe sometimes the love sneaks in anyway.  You just don’t know it.