It seems that lately, I have been doing a lot of cupcakes, and this post is once again, about none other than.  For a while, cookies had their time, but now is The Era of the Cupcake.  Because not only am I writing about cupcakes now, I am also going to be making cupcakes for Thanksgiving.

When I first started this blog, I had no idea what this new-found baking hobby was all about — Cry for help?  Cry for attention?  A way to preserve sanity?  I never thought I’d be so enthusiastic about baking (or cooking), so it still continues to surprise me.  And I still don’t know what it is that I’m hoping to find through all this baking.  I have no particular aim, I’m just enjoying the ride, not really caring where it will go.  Whether it takes me somewhere big or I stay where I am, I’m happy with what comes.  I feel like I’ve already made a few steps towards…what, I don’t know.  And that’s fine.  It seems to be bringing me something I can’t find in anything else.  It’s funny, if I had this approach to everything else in life, I think I’d be met with so many more positive little surprise “blessings” like I’ve been met with on my little baking journey.  Maybe I can take my attitude from this and gradually apply it to everything else.  A friend said to me last weekend that she thinks things will start falling into place for me because I’ve found my passion.  Maybe she’s right.  We’ll have to see.

Slightly scarred from my semi-dry cupcakes the last time, I searched for a recipe that would guarantee me moisture.  I found a jumping point from Manic Mother’s blog.  The cake part of the recipe did not include any mint extract, as the mint was all going to come from the frosting recipe included with the cupcake recipe.  But I wanted to include Andes mint chocolates AND give the cake part a mint kick.  And so, I tweaked the recipe a little and instead of 2 teaspoons vanilla, I made it 2 teaspoons mint extract, 1 teaspoon vanilla.  I also chopped some Andes mints — enough for 1/2 a cup — to add to the batter.  I love that once you get more confident in your baking, you get more adventurous in adding your own touches to recipes.  You start to really feel like a scientist conducting experiments. 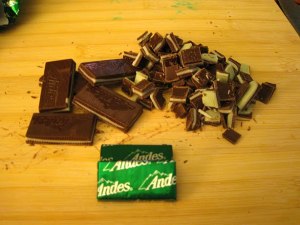 The batter was runny due to the addition of boiled water (I read somewhere that adding boiled water to a recipe with chocolate will bring out the chocolate flavor further, but I’m not sure this is entirely the purpose.  Maybe it’s also to add moisture.), and when I added the chopped Andes mint chocolates, they sank to the bottom of the bowl.  Having coated the Andes chocolate with flour before adding, I hoped that this little trick of coating in flour would help and prevent the chocolate from sinking to the bottom of the cupcake liners when baking.  And I believe it worked.  But next time, maybe I’ll try adding the chocolate chips to a more dense cupcake batter so they will be suspended in the batter instead of sinking to the bottom of the bowl.  The sinking made it a little difficult to ensure that each cupcake liner got its fair share of the chocolate “chips.”  I also made a note to sprinkle the chips into the batter instead of mixing it all together for future repeats of this particular cupcake endeavor with this same recipe.

The Rondoir cupcakes were inspired from my last cupcake venture, and inspired by this picture (look at that, I just noticed it’s got the watermark from the original web site it came from): 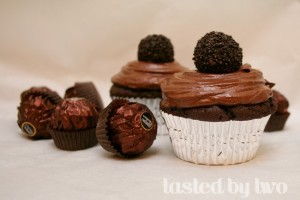 Instead of putting the Rondoir chocolate on top of the frosting, I decided to put it in the cupcake, which I hoped would result in a surprise in the middle.  After filling each cupcake cup about halfway to 2/3 with batter (I used the same chocolate batter as I used for the mint chocolate cupcakes), I plopped a Rondoir right in the center of each one and hoped they wouldn’t roll around when baking.  They didn’t.  And it resulted in a somewhat crunchy, semisolid chocolate in the middle.  Everyone who had one said that they were, “mmmmm so good” or “absolutely fantastic!”  Encouraged by this, I started to dream up other things I could do with the middles of cupcakes…Stay tuned for future posts on cupcake creativity…