“Everyone has Thanksgiving brain,” my friend said to me while we were chatting today.  And I can’t really blame anyone, since it is a short workweek, the office was somewhat quiet today, and the grocery store I often go to for my supplies had a display of vanilla extract, cloves (ground and whole), pumpkin pie spice, and pumpkin pureé conveniently placed right at the entrance, ready to greet any shoppers who might be stopping in to buy supplies for pie-making, shouting, “We’re here!  Take us home!”

And I am no exception.

As I type out this post, the second post I’ve posted today (the previous post was in the works all weekend, I just didn’t get to publish it till tonight), I am baking a pie.  What kind of pie?  A pumpkin pie, of course.  The quintessential pie of Thanksgiving.  And it’s funny that I am baking one, because — I hate pumpkin pie.  However, I was commissioned by someone to bake two pies this week — one pumpkin, one apple — that he would like to take to a Thanksgiving potluck.  And so, rising to the challenge, I gladly accepted the request (I’ve never made a single pumpkin pie or apple pie in my life!).

One taste of the pie filling pre-baking has made me eager to try this one when it’s done.  The recipe I used, one from Food Network, is a Paula Deen recipe.  Upon seeing that it has cream cheese in the filling, I knew that this was a pie I could work with.  Reading the reviews, it seemed that the main complaint was that the filling was a bit runny and the baking time was actually longer than instructed on the recipe.  Solution?  Cut the amount of Half & Half in half (feel free to make any corny jokes here) and see what happens…Next time I try this recipe, I will probably do it with even less Half & Half — maybe 1/4 cup.  The cream cheese is enough to make the pie have a creamy texture anyway.  In the meantime, the recipe:

Preheat the oven to 350 degrees F.

Place 1 piece of pre-made pie dough down into a (9-inch) pie pan and press down along the bottom and all sides. Pinch and crimp the edges together to make a pretty pattern. Put the pie shell back into the freezer for 1 hour to firm up. Fit a piece of aluminum foil to cover the inside of the shell completely. Fill the shell up to the edges with pie weights or dried beans (about 2 pounds) and place it in the oven. Bake for 10 minutes, remove the foil and pie weights and bake for another 10 minutes or until the crust is dried out and beginning to color.

Pour the filling into the warm prepared pie crust and bake for 50 minutes, or until the center is set. Place the pie on a wire rack and cool to room temperature. Cut into slices and top each piece with a generous amount of whipped cream.

Since I cut the amount of liquid in half, I set out to bake for 45 minutes, but after checking on it, the filling is still a bit jiggly.  It has now been baking for 54 minutes as I type.  Took it out at 55 minutes, now waiting for it to cool and set further.  It smells really good in here.  I did have some excess filling, and I decided to put it into cupcake cups without crust.  This ought to be good. 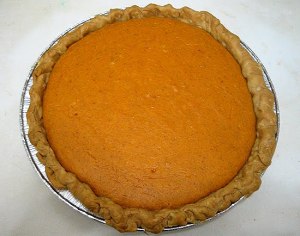 It certainly looks good.  It’s been cooling for some time now, and the jiggling has somewhat disappeared.  I think once it’s fully cool, it will be even more firm.  I can’t wait to taste the leftover filling.  It was great tasting when it wasn’t baked yet, I can only imagine how much better it ought to be now.  More on the taste tomorrow.  Stay tuned for part two of Pie Adventures — Apple Pie…