Writing this post from the home of my parentals…Due to holiday merriment and face-stuffing, this post has been delayed a couple of days.  But I’m sure most of you out there were too busy doing the same as me and celebrating Thanksgiving with your loved ones to even notice that I hadn’t posted about the apple pie.

But before I go on about apple pies, let me share with you in a picture a new “trick” in pie making that I learned while perusing the Pillsbury web site:

Unsatisfied with the previous night’s pumpkin pie — the texture wasn’t quite what I had wanted it to be — it was a bit too soft even after hours of cooling — I did a take-two.  The picture above is the second pumpkin pie, and it is sporting what is called a “pie shield” (just a 12″ piece of aluminum foil with a hole cut through the center big enough to expose pie but cover the outer crust).  I thought that it made my pumpkin pie look like it was wearing protective gear, but it’s used for preventing the outer crust from browning too much during long baking times.  Cool, huh?  Well, I thought it was.  I’m new at this stuff.

So.  The dulce de leche apple pie came out very nicely.  This was my first time making apple pie, and while it smelled wonderful as it baked in my tiny oven, my only regret was that I knew I would not even get to taste it as I was making it for someone who would be taking it to his Thanksgiving potluck dinner.

Not wanting to do a conventional apple pie, not even when I was an apple pie beginner, I wanted to find a recipe with a twist.  I found my recipe of choice on another food blogger’s blog and it can be found here (I like to give credit where it is due).  The idea of a dulce de leche apple pie intrigued me very much, plus reading her post made the inner nerd in me go “oooh!” as it gave detailed instructions on how to make one’s own dulce de leche (the name sounds fancy, but it’s really just sweetened condensed milk heated up till it becomes caramelized).  I seem to have a masochistic tendency in that I enjoy “making my own” this or that instead of going ahead and just buying it pre-made.  I was looking forward all week to making this dulce de leche, especially since the method in the recipe called for boiling whole cans of condensed milk (how very MacGyver!), but unfortunately time was working against me, as I work a full-time job during the day and didn’t have enough time to do all the things I wanted to do (isn’t that always the case?).  So when I picked up supplies for the pie at the grocery store on my way home from work and saw a can of already made dulce de leche and a can of sweetened condensed milk sitting together on the shelf, I had a small battle with myself — one side said, “Go hardcore!  Make your own dulce de leche!” and the other said, “Be sensible.  You don’t have that much time and the pies are due tomorrow…do you really want another night staying up late baking?”  The sensible side won, and so I had to put off making dulce de leche MacGyver style for another time.  PS, I stayed up late anyway.  For those who are curious, there are other, safer methods of making dulce de leche besides the MacGyver method…

For the pie, I used a combination of golden delicious and granny smiths (2 1/2 of each, sliced thinly and very carefully, but I still managed to give myself a small cut)… 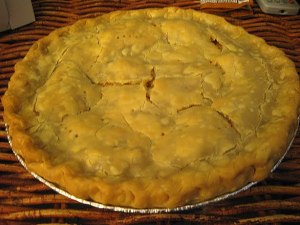 As I write about this pie, I’m remembering the smells that emanated from my kitchen.  I’m so sad that I didn’t even get to taste it, but I hope it lived up to my expectations.  Despite all the eating I did yesterday for Thanksgiving, I could definitely use a slice of this pie right now.  Warmed up and gooey…  And my co-worker who ordered this pie from me is probably enjoying it right now with his friends.  Well, I will just have to make another one for myself.  I’m thinking mini-pies since I’ve got half a granny smith and half a golden delicious left over.

There’s also fall-themed cupcakes that I made for my family Thanksgiving pot-luck including pictures of the food we had, but I think I’ll save that for the next post…I’m getting hungry.  Till tomorrow (probably!).

It is GOOD to be home with the family for Thanksgiving.