I’d made the remark several times since 2010 began that this was going to be The Year of Me.  I was half-kidding, but I guess I took it more to heart than I realized.  There’s something about the ending or the transitioning of a relationship — and here I use the term in its general sense, not in the “couples” sense — that makes me re-evaluate who I am and what I’m doing exactly.  Particularly when that relationship changes in favor of distance and less of a dependence on the other person.  Of course, there’s a lot more to the story than what I’m saying, but the details become tedious.

I’m more self-reliant these days and I feel my independence greatly.  It’s kind of strange, but cooking and actually succeeding in creating dishes to serve to either friends or just myself has provided me with a sense of empowerment.  It’s as if being able to cook (and actually be good at it) for myself has become a form of validation that I can actually depend on myself.  I never expected to get this feeling out of simply learning how to cook, to be honest, so it surprises me that it’s affected me like this.  Then again, it makes sense.  Feeding oneself is one of the most basic things we need to do to survive.  And once I knew I could do this, without the aid of the takeout menu, the man who takes my order over the phone, the man who delivers my food and, not to mention, the chef who throws together my food, I felt less helpless.  More like I have it together.  Which is funny, because I never even knew that not being able to cook for myself was a source of feelings of inadequacy and helplessness for me.  Wow, I just sounded like a therapist there!  Ok, maybe not everyone can relate.  I’m waxing poetic about the simple task of cooking, and you’re probably thinking, “It’s just cooking, for God’s sake!”  That’s ok.  I know there are some of you who know what I’m talking about.

In keeping with the mentality of taking care of myself and saving money, I actually made the effort to cook tomorrow’s work lunch tonight.  Most people would simply throw together a sandwich, but I already did that last night, and I felt like being good to myself.  So I made a tomato cream sauce to serve over some pasta.

The sauce I made was not exactly the sauce in the recipe, as I added my own touches — green bell pepper, mushrooms, and chicken (pre-cooked and pulled from a whole rotisserie chicken I bought for exactly the purpose of using as sandwich filling, sauce ingredient, etc.)  I followed the preparation in the recipe otherwise, but also with the addition of some flour dissolved in water to thicken the sauce a bit more.  I also thought that it needed a bit of a cheesy flavor, so I put in a little over 1/4 cup of grated parmesan cheese.  The great thing about cooking as opposed to baking is that it’s a lot more forgiving of your little tweakings and should you deviate from the original recipe, it’s usually alright even if you’re not sure what’s going to happen.  In baking, taking that gamble should only be done if you’re a seasoned baker and you really know what you’re doing.

I normally don’t like AllRecipes.com as a recipe source (recipes from there are generally a hit or miss), but this recipe had such good reviews that I was intrigued.  The recipe follows:

Tomato-Cream Sauce for Pasta (from AllRecipes.com)

The sauce was a good blend of tangy from the tomatoes with a hint of sweet.  When I added the rotisserie chicken chunks, it improved the flavor even more.  The heavy cream added tempered the stronger flavors and just married all of them together quite harmoniously.  I heaped the sauce onto some spinach fettucine, sprinkled some parmesan shavings, and packed it in my little tupperware.  I can’t wait to eat my lunch tomorrow. 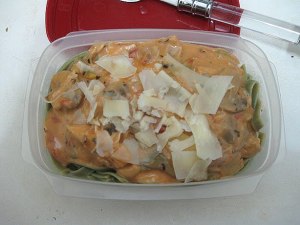