This seems to be the blog entry that doesn’t want to be written, because no matter how many times I’ve attempted to write it, my heart just wasn’t into it.  Maybe because I’ve been making red velvet cupcakes for a while now and it’s not something new…I don’t know.

I’ve been making red velvet cupcakes since the beginning of my baking journey, using a Paula Deen recipe from the Food Network — with a lot of tweaking.  The recipe normally calls for 1 cup of buttermilk, but since I didn’t have any buttermilk the first few times I made this, I used a substitute — 1 cup milk + 1 tablespoon vinegar that I let stand for 5 minutes.  And I use 1/2 cup of Dutch-processed cocoa powder instead of the measly 1 teaspoon of cocoa powder in the original recipe.  And I play around with the amount of vegetable oil, sometimes using 1 1/4 cups, sometimes the full 1 1/2.

Recently having discovered that my local grocery store now stocks buttermilk, I decided, hey…let’s use the real thing!  And that’s when everything started to go wrong.  Well wrong-ish.  While the taste and texture were practically perfect, the cupcakes, which were mini-cupcakes this time, ended up separating from the papers because the batter had been too moist.  I used the full 1 1/2 cups of oil PLUS the 1 cup of real buttermilk as opposed to my substitute.  The texture of buttermilk is far different from the texture of regular milk — buttermilk is thicker and not as fluid as regular milk.  I guess you learn something new everytime, even though you’ve made a recipe over and over.  The slightest change can cause unwanted results, and so the unwanted, peeling-away-from-the-paper-liners cupcakes became red velvet crumble, which I am saving for future use when making red velvet cake truffles.  Who knows when I’ll get to that though. 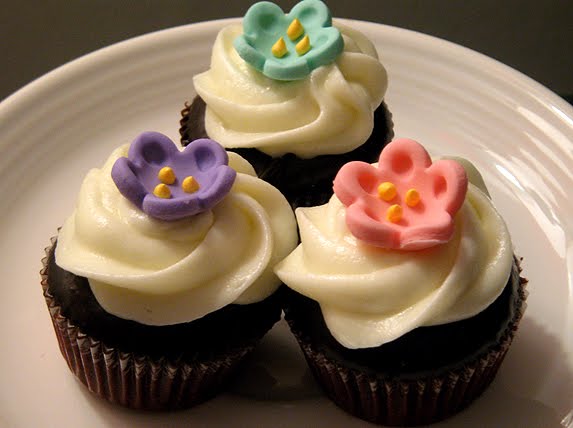 The picture above is of the final product after I made a new batch, this time going back to my milk + vinegar substitution for buttermilk.  I think the problem the first time was that there was too much oil for the amount of buttermilk used.  This time I used my usual amount of oil, 1 1/4 cups, and my substitute for buttermilk and it turned out just fine.  Dipped the tops of each of the mini-cupcakes in ganache, frosted with the traditional cream cheese frosting and plopped a fondant flower on top of each one to create a very sweet looking garden: 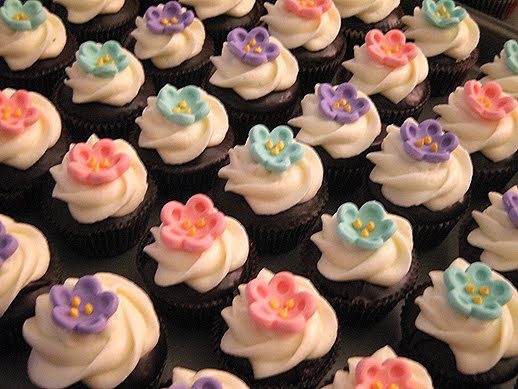 The birthday girl loved the cupcakes, and I think only 3 survived after the rest were devoured…
And perhaps a little more heart next time!