Indian sweets, or mithai, first introduced themselves to my palate when I was 11 years old, at an Indian restaurant called Akbar in Long Island where we were celebrating one of my relatives’ birthdays.  I am not of Indian descent, but I have a great-aunt who married an Indian man and so through marriage, I have an Indian great-uncle.  Anyway, as I was saying, I first had mithai when I was 11, after having consumed a very heavy Indian lunch buffet.  No other desserts were available, so I had a few pieces.

The experience was not one which I expected.  I didn’t know it then, but I was actually eating burfi, which is a variety of mithai.  Basic burfi (or barfi) is traditionally made with condensed milk and sugar, cooked until solidified.  Sometimes ground pistachios are added, sometimes spices such as cardamom, sometimes fruit.  While I liked the milky taste, and the sweetness, the spices that were in the particular burfi I ate were a little too weird a combination for my 11-year-old palate.  I tried to like it, but I couldn’t get over the spices.

Now nearing 30, I still don’t particularly like Indian sweets, so when I got an Evite to my friend’s sister’s fledgling business’s tasting event, I was a little hesitant to accept.  Her business specializes in, and I quote the Evite, “petite confections that blend the essence of traditional Indian mithai with contemporary flavors and decor.”  At first I thought, how contemporary can you get with such strong flavor profiles that define mithai? 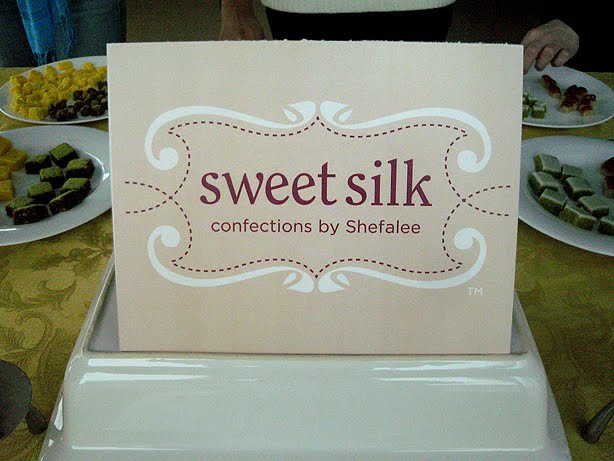 It turns out you can get very contemporary.  The flavor combinations presented at the tasting event were ones that were completely unexpected to me.  We were presented with 13 combinations and asked to fill in a survey after tasting each one.  From what I can remember (since there were so many I can’t remember them all) there was mango rum, pistachio with white chocolate (I think it was white chocolate on top), orange with dark chocolate ganache, combinations with pecan, walnut and apple topped with caramel, another one had guava…even a mocha latte flavored one…Oh, and another one with chai flavoring.  My head was spinning just trying to get them all straight!  My favorite though was the coconut with dark chocolate ganache.  It was flavor combination #1.  I first thought the mocha flavor was a little strong but now that I think of it, it was actually perfect.  There was enough subtlety of flavors to leave you wanting to try another piece after you had just one, sort of like a teaser that makes you want to know more.  If I had a whole box of these things sitting in front of me, I’d end up eating the whole thing, to tell you the truth.  Just because the flavors were so interesting and the sweetness not too overpowering to keep me from going after more.  I think she changed my mind about mithai today.  In fact, at the end of the tasting, when things quieted down a bit, I asked if I could take some home and she was generous enough to let me have quite a few pieces.  I was a bit shy to ask, but I always considered it a compliment when people want to take home your stuff so I didn’t think she’d mind too much.  Unless she planned to bring the sweets somewhere else, which it turns out she didn’t.  But anyway, I happily walked away with a few pieces of different flavors.

The designs were definitely very contemporary and very neat and cleanly done.  Very…cute, you might say.  I hate to use that word to describe it because “cute” is so overused by girls and just overused in general, but I have no other word for it but cute.  Okay, pretty, delicate…those would be other adjectives.  See pictures below… 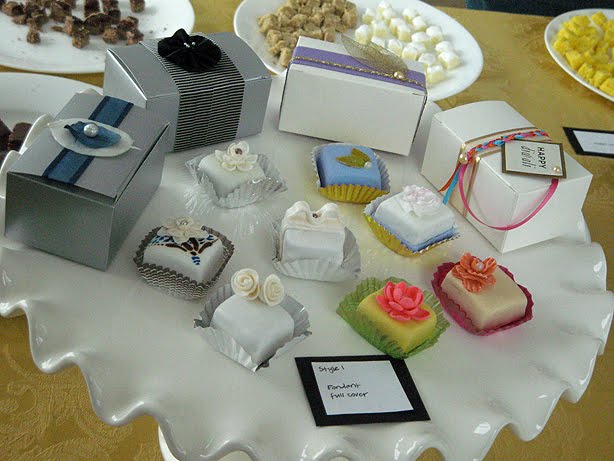 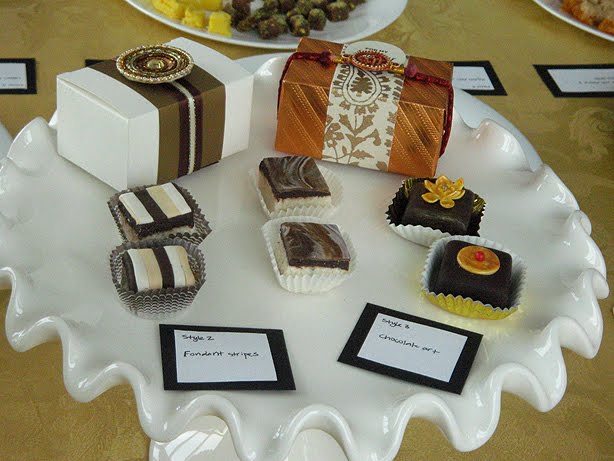 Upon seeing the designs, I asked her if she had taken any classes in how to make the delicate flowers or classes teaching you techniques for decorating.  She hadn’t, which amazed me even more.  I would love to be involved in helping to decorate these sweets the next time she made them for an event just so I could learn how to make those flowers.  It can all get particularly time-consuming and labor-intensive, which I know from my own experiences in cupcake decorating.  Which leaves me to think that she’s got to love doing this because no one would put themselves through mind-numbing hours of painstaking labor over handmade flowers unless they loved it and had a passion for it.  So I was pretty excited for her.  If anyone wants to know more about what she can do, perhaps get more info, the web site is http://www.savorsweetsilk.com/.

That, pretty much, was my day.  I haven’t been baking stuff lately, at least nothing out of the ordinary, hence the lack of posts.  I’m going to be up for at least another half hour tonight.  I’m waiting for my kahlua cheesecake to properly settle in the oven.  I used a non-water bath method that was supposed to prevent cracks, but lo and behold, there is already one crack in the middle of my beloved cheesecake.  But that’s alright.  It’s the flaws that give things character…  A post on the kahlua cheesecake will be upcoming, methinks.  Though today inspired me to branch out and try more unusual flavor combinations in my baking.  Green tea sponge cake…something with lavender…I need to break out of the conventional baking box.  I also still want to do macarons at some point.  I just don’t think I’m ready yet for my Mount Everest of baking.  I need to research techniques a little more for that one.  Green tea macarons would be pretty interesting, I think.  After today I might also try making burfi…just to see how it’s done.

Anyway that’s all for today, kids.  I think I heard my timer go off a few minutes ago.  Cheesecake is ready to be chilled.  Oh, yeah, nearly forgot to mention…I’m participating in a charity bake sale in April, benefiting Share Our Strength, a charity that works towards ending childhood hunger.  They have a national campaign called the Great American Bake Sale and basically, you can register your bake sale with SOS and your proceeds will go towards their cause.  A friend’s coworker e-mailed me last week after my friend gave her my e-mail address.  Kind of excited because Brooklyn Flea might donate us a table if we get enough momentum.  So if you live in the NY metropolitan area and you’re interested in contributing, leave a comment or send an e-mail to tinykitchengirl@gmail.com!

One thought on “An Afternoon of Sweet Silk”