The first recipe I saw for zucchini fritters, or Kolokithokeftedes (I’ll wait to give you a moment to figure out how to say that.  Done?  Ok.) was on a blog called Closet Cooking, the blog of a fellow cooking/baking enthusiast who has a closet-sized kitchen (I felt a kinship with this person, if only because I know that he knows the trials of preparing meals in a very small space).  The picture looked so good and the recipe so simple and uncomplicated that I had to try it. 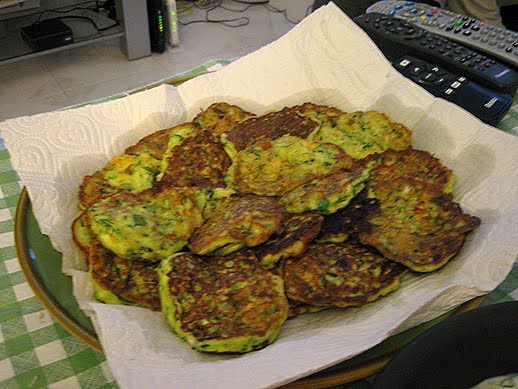 Great taste, but not so great texture.  I made the zucchini mixture the night before I was going to have my friends over for lunch, and since the recipe didn’t call for squeezing the water out of the zucchini after shredding, the water leaked out of the zucchini and made the batter even wetter.  When I served it to my friends, I kept telling them that they were kind of soft but it’s not because they were undercooked.  When I apologize and/or make excuses for my cooking or baking, it’s a sure sign that I’m not happy with what I created.

Not wanting to give up on these little guys because I want to see a zucchini fritter with the perfect ratio of crispy to soft, I did a search on the internet on how to improve it.  I already had a few ideas (such as adding panko breadcrumbs), but wanted to know if other people had the same train of thought and if so, how it turned out for them.  I came across another recipe which I have yet to try, and sure enough, this one adds panko breadcrumbs and tells you to remove some of the water from the zucchini using the salting method.  I’m a little wary of using the salt method though, because I don’t want my fritters to be salty.  I may try my own way, which is putting the shreds into the oven on low temperature for a few minutes just to dehydrate them (sweat them) just a bit.  But that’s for next time.

The main reason I wanted to do this recipe was the dill that is included in the ingredients.  I love dill.  I love the smell, I love the taste…it’s just so fresh.  In fact I’m thinking up other ways to use the leftover dill from the recipe.  As I mentioned in a previous quiche post, maybe crab quiche with dill…lots of dill. 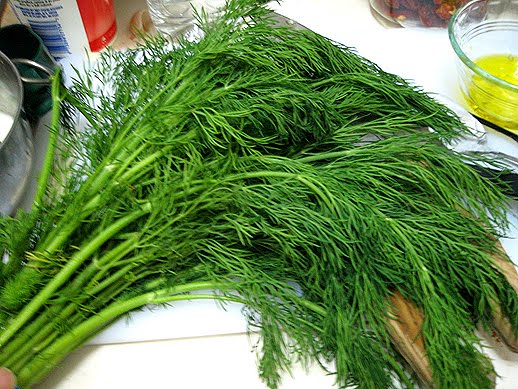 I also made a tzatziki sauce to accompany the fritters, which turned out better than the fritters.  It’s also from Closet Cooking…

I’m in better spirits since the post directly before this one.  I know that was only a little over an hour ago, but after writing it I got up from the couch and busied myself with a new experiment in the kitchen, which I will of course be writing about.  It looks like it’s going to turn out well.  We will have to see.

I’m glad that work’s busy, my social calendar is full, and I feel like my life is being presented with a lot of new paths I could possibly follow.  It’s good to be surrounded by friends and spending time laughing and sharing things with them, especially when inside, a part of you is sad.  And this part of you might be sad for a while, because there comes a point in every situation that involves your heart where you’ve started moving on in terms of your life, but your heart has somewhat separated from you because it’s still taking its time feeling things.  And at that stage, there’s just no rationalizing away the feelings, there’s no stopping them from being.  I suppose this is the “I’m-still-sad/hurt/disappointed-but-life-goes-on-and-I-need-to-move-on-to-what’s-next-for-me-because-I-can’t-sit-here-mourning-forever-and-my-heart-will-eventually-get-with-the-program-if-I-just-go-on-doing-what’s-best-for-me” phase.

Ok, this is totally cheesy and some of you will roll your eyes, but I love Grey’s Anatomy, especially the voice-overs at the beginning and end.  From the Valentine’s Day episode:

“We have to keep reinventing ourselves, almost every minute because the world can change in an instant. And there’s no time for looking back. Sometimes the changes are forced on us. Sometimes they happen by accident and we make the most of them. We have to constantly come up with new ways to fix ourselves. So we change, we adapt. We create new versions of ourselves. We just need to be sure that this one is an improvement over the last.”

3 thoughts on “Frittering Away the Time”