This week and last week, my company has been hosting several fund raising events from food drives to sample sales to bake sales, all in an effort to raise money / collect food for the Bag Hunger campaign, a nationwide project of Macy’s Inc. (parent company of my division — Bloomingdale’s…and now you know where I work) to benefit various hunger relief charities across the nation.  I volunteered to be one of the “captains” of the effort for my pyramid, along with two other girls.  We organized a bake sale in our building and to the sale I contributed black and white cookies (more on that in a later post) and the following…

Bloomingdale’s cupcakes.  Following suit of what I did with the Yankees cupcakes, I created a stencil from a printout of the iconic “b”, took an Xacto knife and went to work cutting out little “b”‘s out of gum paste. 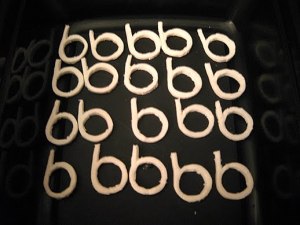 I used my favorite dark chocolate cupcake recipe, because ever since I made it for the first time, I just fell in love with it.  I usually pair it with the frosting in that same post, but this time I used a ganache that I found in Shirley O. Corriher’s book, Bakewise.  Unfortunately, the medium-consistency ganache recipe in the book was too runny for me and I ended up adding some leftover frosting from the last time into the mix to make it thicker.

Since I wasn’t using the usual frosting, I wanted to make the ganache coating thicker so I dipped each cupcake top twice.  After the second dip, I plopped a little “b” in the middle and delicately sprinkled white nonpareils on the edges.

The cupcakes were a big success, having created a stir among those who had them.  My boss’s boss bought one for the CEO, and that was a huge deal.  I was thrilled he was going to get to see what I did with the logo.  Later on, she forwarded me an e-mail from him saying the cupcake was “Yummy!”  I also had someone else from the office that I had never met e-mail me saying, “Those cupcakes you made for the bake sale today were literally the best things I have ever eaten!”  She also asked me for the recipe, which I am willing to share with her, having already told people on this blog where I got it.

This was the third time I’d ever made these cupcakes, and I haven’t changed anything in how I make them, but from the first two times, I did learn that if you put them in heaping piles into 12 cupcake liners, you will have cupcake overgrowth — the edges will expand over the rim of the cupcake mold when baking.  So this time I only filled each cup about halfway (instead of 2/3) with batter and I had perfect, no-overgrowth cupcakes, ready for dipping into ganache.  And one recipe makes about 15-16 cupcakes…at least with my size cupcake pans they do.

The bake sale overall was a success, and we raised a good amount of money to put towards the collective effort of the pyramid I belong to at work.  I also put the “you never know till you ask” thing to practice by asking the nearby Starbucks (where I get my misto every morning, so routinely that when I walk in the baristas already know what I’m going to get) to donate a traveler box of brewed coffee per day of the bake sale.  They agreed, and so coffee was provided at our bake sale.  In addition I got to work with others who aren’t part of my immediate group and so I was able to expand my horizons a bit in the social department.  Always a good thing to make new friends.

It was a two-day bake sale and this being the second day, people didn’t buy as much and we ended up with more leftovers than we had yesterday.  I gave the leftovers (enough to fill a “medium brown bag”) to a homeless man sitting at the corner of the block my building is on.  I hope he enjoys it.  There was so much food in there it would probably last him a couple of days.

On my way home, I was so tired and wound up from this week so far that I thought of ordering out as a reward.  But then I thought of the campaign I’d been raising money for and its goals.  I thought of the homeless guy I gave our bake sale’s leftovers to and suddenly I didn’t really think I should order out anymore.  I had a refrigerator full of food at home that on any other day I wouldn’t even really think twice about.  But today, especially after directly giving the food to the homeless man, who gladly accepted all of it, I just had a little bit more of a conscience about being wasteful.

3 thoughts on “Like No Other Cupcake In The World”