I really wish I had the foresight to name my blog “I Love Food” instead of “A Girl Bakes In New York” when I first created it.  I originally intended for this blog to be only about my baking, but as time goes on, as with any other hobby, one finds that the passion morphs into something more like a quiet love for the activity.  Which is not to say that I don’t love baking as much.  I just wish that I could write about other food-related things in here during the times when I’m not baking anything new.  Hence the name change to “A Girl Bakes (And Eats) In New York.”  Didn’t want to stray too far from the original title…

Anyway, what I really want to talk about right now is my latest obsession with food trucks and food carts.  Bored with my usual work lunch routine (going to the same, overpriced, by-the-pound hot/cold buffet place every single day), I decided to try a new approach to lunch — the food cart / food truck  There’s just something about lining up on the street, waiting to order food from a truck that only makes its appearance in that particular spot some days of the week as opposed to going to a chain that you know is all over NYC (Café Metro, Pret Á Manger to name a couple of examples).  I know I’m totally late to the food truck party, but as they say, better late than never, eh?

One afternoon I was chatting online with a friend and he gave me the names of some food trucks his girlfriend loved when they lived in New York.  He also sent me a list of NYC’s 11 Best Food Trucks.  I was craving dessert (badly!) one afternoon (I was envisioning a moist, fudgy brownie in particular) when I consulted this list.  I came across The Treats Truck, and was intrigued by their Mexican Chocolate Brownie (basically a chocolate brownie with cinnamon and chocolate chips).  The truck, unfortunately, was located 3 subway stops downtown, and very close to another friend’s office.  And I only knew of its location because he told me it was just a couple of blocks down from his office in response to my Facebook status lamenting the lack of good dessert trucks in my particular neck of Midtown.  But whatever, I needed my dessert and I was saddled with a strong curiosity about food truck desserts!  So I took the train downtown just to get to this dessert truck.  My friend served as added motivation because even better than getting a dessert is getting a dessert from a truck, with a friend.  And I got to make a short social call too.

As I was paying for my brownie, my gaze fell upon what looked to be peanut butter sandwich cookies.  I asked the nice lady what they were, and indeed I was right.  Some filled with pb & j, some filled with chocolate.  I opted for chocolate. 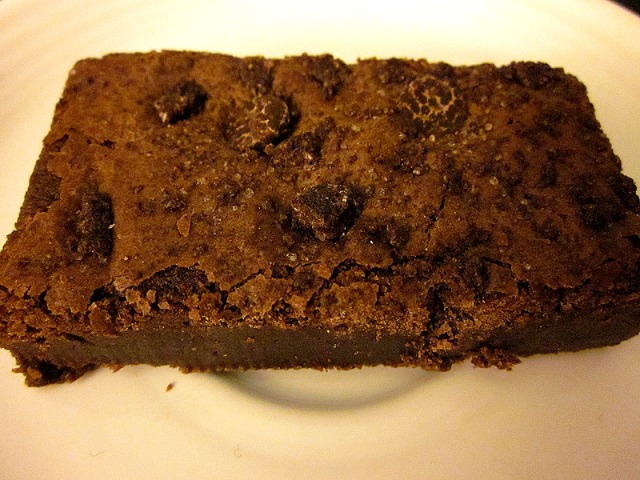 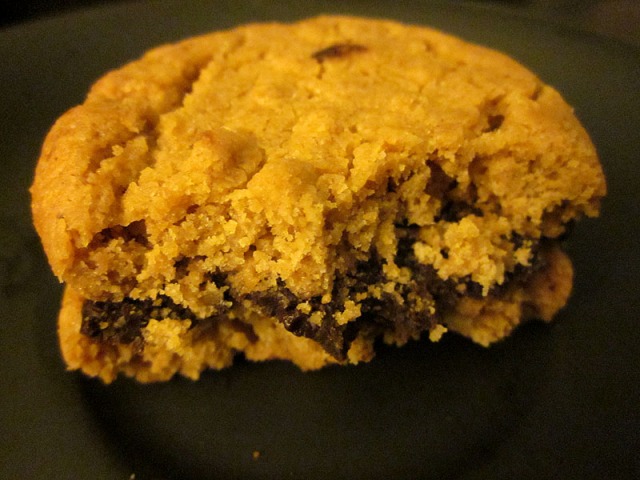 I love my camera’s macro setting.  It magnifies every bit of crumb-y goodness…  I loved the brownie, but the pb cookie sandwich was what stole my heart.  It’s like thinking you’re in love with one guy and then finding out you’re actually even more in love with the one you didn’t think you’d even like as much.

At $2 per cookie sandwich (it wasn’t that big, either, about the size of two average sized cookies stacked together with chocolate in the middle), it’s not something I could regularly indulge in (and it will add up, given my addiction to sweets!), so I thought, hey, why not try to make my own pb sandwich cookies?

Okay so they look more like mini whoopie pies, but who cares?  They were pretty good!  Not like the original cookie I tried to copy, but still great by themselves.  I brought a large container to work containing about 2 dozen and only 5 were left by the end of the day (I had to snatch away the container at that point because I wanted to save some for a friend).  I used organic natural peanut butter and Ghirardelli bittersweet (60% cocoa) chocolate for the ganache.

The cookies were soft (cake-like) and the filling thickened to just the right consistency when cooled (not too tough, not too runny/slippery so that the cookies couldn’t stay together).  I’m going to make another attempt, and this time with a non-chewy, non-cake-like cookie, but this attempt was pretty damn good already!

Below are the recipes I used (I figure I’d just link since it came from another blog…give credit where credit is due, etc.):

Note: As mentioned above, I used natural, chunky peanut butter instead of creamy peanut butter and the addition of roasted, salted peanuts (figured I’d kill two birds with one stone).  I also reduced the brown sugar to 1 cup as opposed to the original 1 1/2 cups called for.

To make the ganache, heat the heavy cream and the butter in a saucepan over medium-high heat.  Bring to a boil.  Place the chocolate in a stainless steel bowl.  Pour the boiling cream over the chocolate and allow to stand for 5 minutes.  Stir until smooth.  Cover with plastic wrap and chill for at least 1 hour, or until the ganache has thickened enough to be piped onto a cookie.